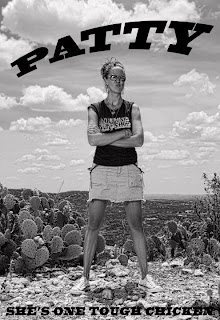 Greetings from the Chicken Coop, and from my heart. I am here. I am willing. I am listening. And I am lit up like a firecracker, too!

It's funny how much I've hassled this last month or so over many things - what to do with my life, where to live, whether or not to teach yoga anymore, what to Blog about, what to eat, what to drink, how much alcohol I'll allow myself to drink, where to work, what to wear, who to be...

Let's just say that the Chicken Coop has been in full force. And when they're louder than my heart, I become a slave to them (my thoughts) and they have me going in so many directions that at the end of the day, I realize sadly that I haven't really accomplished much. And so it has been, the last month and a half of my life. And you know what? I LOVE IT WHEN THE CHICKEN COOP TAKES OVER!!!! Everything that happens in my life, every thought and action, every emotion and reaction, is a chance for me to grow. It hurts at the time, and it brings up a lot of fear, but it's when I step out of that chicken coop again, and look over my shoulder at it for the hundredth time, that I say "Really?? It's just YOU again??"

It's not the actual events that are occurring around me that cause the fear. It's how I react to them that either shuts me down or helps me move through it with grace and ease. The Chickens are the reactors. My heart is grace and ease.

Patty. That bitch. She has control issues because that's how she maintains the illusion of feeling "safe." She is large, both figuratively and physically. She's loud, bossy, judgmental, and thinks she's always in charge. She has a pretty apron on, a pencil behind her ear, wide hips, big earrings that hurt, red lipstick, purple eye shadow, curled bangs, and sometimes has a cigarette dangling from her beak. She wears high heels even though they hurt her feet. She thinks being taller helps her position of authority, and her older sister says they look great, so she wears them. She clomps around in her designer heels that don't fit right, barking orders all the time, rolling her eyes because she knows everyone, on some level, is just a waste of her time.
She is famous for clucking and clomping around in the coop, squawking "I told you so. I told you we were right. We're always right. If you would just listen to me, things would be much easier, but you're still floundering around all over the place, taking the "democratic" approach and asking Grace, Hank, Octavia, and all those other weaker chickens what their opinion is before making your final choice. None of them are as strong as I am. They can't make up their minds to save their own chicken asses. And you just refuse to see it!" She storms off to her room, and sits in front of her vanity, applying more makeup and perfume, and assessing her wrinkles and flabby chicken neck. She constantly edits her "To Do Lists" with her pencil. She lights another cigarette so she can use her fancy, antique ashtray. She poors herself a cold glass of Chardonnay. She's the only one in the Chicken Coop who has her own room. All of the other chickens live in community, sharing their space with each other, learning to co-exist. Not Patty. She sectioned off her corner a long time ago, and it is her territory. She wrote "Enter And I'll Snap Your Scrawny Head OFF" in red lipstick on the door. It's been there since the early 80's. She keeps applying more layers of lipstick to it, so that everyone remembers the consequences upon entering.

Patty has been a very active part of my brain since I can remember. She's demanding, sometimes passive agressive, and sometimes just aggressive. She keeps score, burns bridges, and manipulates to get what she wants. She loves rich food, drinks lots of wine, smokes cigarettes, loves drugs of any kind, legal or not, served on a plate with whip cream and chocolate, or on a plate with a razor blade. She doesn’t care what form they come in, as long as they keep coming. She is my addict. And right now, she's a little put out.

I stopped teaching Yoga 6 weeks ago. It was both voluntary and involuntary. It felt predestined and unpredictable. It was abrupt and painful, and it was calming and necessary. The safety of my "yoga bubble" popped. I was left with nothing, and everything. All by design, of course. And it has taken me some time to reassess, readjust and reorganize. My brain has been in overdrive. My heart has been calm and reassuring. I know everything is exactly as it should be. I see, in hindsight, that I was exhausted from teaching and practicing that yoga, and that I needed desperately to pull back. The details are not important. I moved through it with grace and ease... all the while, Patty was clomping around up there, pissed off that I didn't pay much attention to her. She put up a hell of a fight, and there for awhile she was running my show again. I was bossy, loud, drank too much wine, smoked too many cigarettes, ate whatever I wanted, kept score, and stayed as far away from the yoga studio as possible. Octavia, my yoga chicken, has been watching Patty with wide eyes. But she never lost her sense of awareness.

I find it all so funny. Of course I’m back to a life of balance now because my heart’s desires are so much stronger now than my brain’s mania. It was like an old familiar storm passed through me again. Patty was up there, in her room, sectioned off from the rest of the coop, practicing voodoo on the other chickens to keep them quiet and subservient. She was making Hank play some old records for her so she could spin around and dance with her wine…

Hank was powerless over her. He moved in slow motion over to the I-Pod station in my brain.

Stevie Nicks was singing “STAND BACK, STAND BACK! In the middle of my room I did not hear from you!” (Patty stands in the center of the room with arms spread out, shaking her hips.)

America reminds her of her long battle with depression, and she revels in it…“Well I tried to make it Sunday, but I got so damned depressed, that I set my sights on Monday and I got myself undressed.”

“The Boss” busted out with: “There were ghosts in the eyes of all the boys you sent away. They haunt this dusty beach road, in the skeleton frames of burned out Chevrolets…” (She puts her hand on her forehead and remembers with all of her dramatic senses, how many bridges she had to burn to get where she is).

My heart stirred. It always does when it hears music. Patty fidgeted and dropped her wine glass. It’s the only time she knows she’s outmatched. Hank, relieved and exhausted, played the final request, my heart’s request:

“I pray for guidance, and protection. And I know if I just keep on believing, everything’s gonna be alright. Loveliness and tenderness and happiness and openness and togetherness. And the vampires gather round me, and move in to take a bite. They wanna drink my blood of courage and try to take away my fight. But no, no, no, they can’t do that. For one truth I learned in life. You want to scare away the vampires, you simply guide them into the light.” -- Michael Franti and Spearhead.

Michael Franti has Vampires. I have chickens. Patty is laying on her side on her red velvet chaise lounge in her room these days. Purple boa around her flabby neck. Her cheeks are puffy. She’s propped up on her elbow clicking a high heel in the air. She’s waiting.