Dear Katherine, you left your backpack.

Wednesday before Turkey Day, I came home to South Austin after being in Wimberley overnight. It's my usual schedule. My roommate, Chrislyn, had already gone home for the Holiday weekend. I drove up and saw that my front door was wide open behind the screen door. I could see through the house, all the way through to the back sliding door, also pulled wide open. Fear is an interesting emotion, the way it creeps through you slowly, and it slows your mind down so much that rational thinking becomes extremely difficult. I thought maybe Chris was still home, even though her car was gone. I thought maybe I'd left the door wide open on accident. I couldn't accept what had happened at first, but slowly I ruled out the obvious and called 911. I was too afraid to turn the truck engine off. I sat in my truck and waited, furious and scared that they may still be in our house. My masculine side and my ego wanted to bust through there and smell them out, hunt them down and face them head on. My softer, feminine side said, "wait, you are not here to handle thieves." It was a clear message. I listened. Once the police came and checked inside, I was afraid to go in and face what damage had been done, what was missing, what remained. It's a gut wrenching feeling. And it's a familiar one. The feelings that come up are powerful enough to shake your core, make you question the human race and God entirely, and eventually leave you standing there with your hands stuffed in your pockets like an angry child who wants to blame everyone else for her anger, when actually it is all mine.

There is no doubt, it sucks to have stuff stolen. It's funny when you tell people you were robbed, they always want to know what was stolen. A subconscious conversation starts up underneath the one you're actually having. Most people are afraid of being robbed and what they really want to know is what to expect when it happens to them, so they can start mentally preparing for it. So here's the list, folks:

They don't want hard drives, thank God. They're not worth much, and it's too time consuming to wipe them clean. Laptops are worth the time because they're worth more at the pawn shop. Computer monitors are easy to carry and easy to pawn. All of ours were taken. Jewelry is a no brainer. So are flat screen TV's and prescription drugs, but we don't have either in our house. Musical instruments in cases are easy. They took Chrislyn's great grandfather's violin. I know that one hurt her as much as losing the journals that were tucked into a duffle bag with other things in it. They just took the whole bag. You realize that what matters most to you is not necessarily monetarily valuable. It is sort of a beautiful lesson.

There are many factors that contribute to the amount of stuff that's stolen, but I think the big ones are time and experience. I've heard of robberies where the thieves are high on drugs, and they not only steal stuff, but they take great pleasure in destroying things along the way. All in all, we got off with minimal damage to the house, a list of things that will eventually be replaced, and a few things that will always be missed. And every now and then, and if you're lucky enough, the thieves make mistakes. In this case, they left evidence. I was standing by my desk after the police left, looking at the space where the computer monitor once was, and noticed a bag sitting in my desk chair. It was a child's backpack. I'm sure my jaw dropped. It was black mesh, and in the front pocket were several pens for school, in an assortment of bright colors, along with a shoe string, and one post-it note that said: "Is it okay if Katherine works on her math homework in your classroom? If not, send her back to mine." It was dated 11-14, with an illegible signature at the end. I called the police and they came back and got it. It's evidence, after all, they tell me. I felt the anger shift a little inside me. Whoever robbed us has a daughter, or perhaps a teenage girl was in on the robbery, sitting at my desk, wondering what else she could take. Perfume and jewelry were stolen. My 5 gallon glass jar full of change. They went through my belts in the bottom of my closet and took one that I never wear anymore, the one with rhinestones all over it. An antique soap dish is missing. A painting was forming in my mind. I could see a young girl in our house with older men or women who had the experience to break into sliding doors and pass things through in the night. I could see this girl, eyes full of mischief and wonder, as she roamed around our house taking whatever pleased her. Half empty perfume bottles are a beautiful thing when you have none.

My amazing super hero of a sister came over later that evening. I felt frazzled, bewildered, exhausted, angry, scared and sad. She had the perfect remedy. She arrived, backed her SUV up in my driveway, and unloaded an arsenal of spy equipment. She was dressed in black and was holding a bat. She carried in a giant box and my smile grew wider as she unpacked hockey sticks, cleats, tiny plastic remote control dogs, batman capes, gloves, flashlights, goggles, hunting knives, both real and fake, pellet guns, giant plastic jars of pellets, diaper creme for my door knobs incase they came back (she said it was a bitch to get it off your hands) and the cardboard box game called "Trouble" for me to set inside my living room window to scare off burglars. 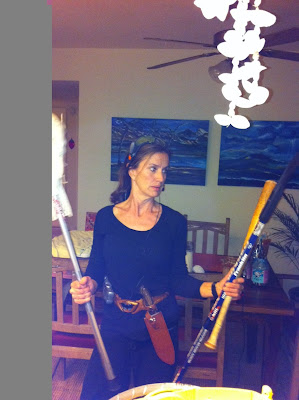 We played Charlie's Angels for the next couple of hours. We talked about Katherine and what life must be like for her. We suspect my neighbors who live across the street are either directly involved or know who is. Six kids live there with their mom and her boyfriend. The oldest is a teenage girl. I don't know her name. A neighbor tells me that the boyfriend who lives there told him he's been in and out of prison, and he's in a gang called "The Bloods." (I told Libby this, and she said, "that's so 80's.") But the truth is, Chrislyn's car was broken into a month ago, and Rodney's a few months before that, all right in front of that neighbor's house. The kids have come over asking for money. After the cars were broken into, I stopped feeling safe. The boyfriend spends lots of time outside talking on his cell phone, watching our house. I honestly felt like it was a matter of time before something else went missing. We were too easy of a target. I don't know if they are to blame, and I don't spend much energy thinking about it anymore. But I do wish I could give Katherine back her backpack, filled with new tablets, pencils and folders.

I sat at my mom's dining room table the next day for Thanksgiving dinner. We added something new this year. We went around the table and each of us shared a favorite Thanksgiving memory. It was my idea. I needed the love from those stories. And in the midst of reminiscing, time slowed down for me and I saw it all with my turtle vision, my spirit. My family around me at that same table, all healthy and accounted for. My mom's crocheted turkey attached to her apron, my dad's laughing eyes, my cousin's jokes, my sister's quiet tears because her boys weren't there this year. The same plate of food set in front of me that my mom and aunt prepare every year with recipes from generations past. I thought of that teenage girl in my house, two days before Thanksgiving, rummaging through closets and medicine cabinets. She was stealing love. It came in the form of perfume, computer monitors, belts and jewelry, which will never sustain her, but for now, it's all she can get. Every person who stepped foot in our home while we were gone just wanted love. For them, it's stealing so that they can get cash and get their needs met. Should they be caught, arrested, and sent to jail, the need never changes. Should they end up living a life of crime, in and out of jail and prison, the need is still the same. Perhaps they end up with hate in their hearts, emptiness in their eyes with drugs flowing through their bloodstreams... the need will always be there. It's a simple need, too. I got my fix that night looking into my sister's spy box and the next day at my mom's dining room table.

I'm not praying for the extra money to arrive so that I can buy a computer monitor. I'm praying that I hold on to every bit of compassion I feel in my heart for human beings. We are all in this together. I was hoping on Turkey Day that maybe Katherine was happy wearing a new belt, perfume on her wrists, and new earrings in her ears. I also hoped that she paid attention to the little chicken inside her head that said it was wrong. I hope she feels, at some point in her life, what real love is. And I hope she fights for it with every ounce of strength in her body. There isn't anything more valuable than that.
Posted by Jamie Barnard at 6:30 AM 1 comment: